There is an adoptive family tradition at the White Swan Hotel called the Red Couch Photo.
Today was that day.
Travel group 1591 dressed their children in silk finery and took pictures. Lots and lots of pictures. Too many for me to show in one post, but I will give you a sampling. Including one of all our freshly adopted children. 16 kids in one picture.... quite the undertaking! 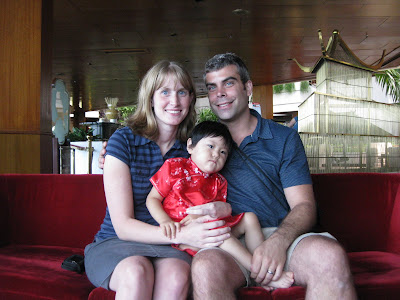 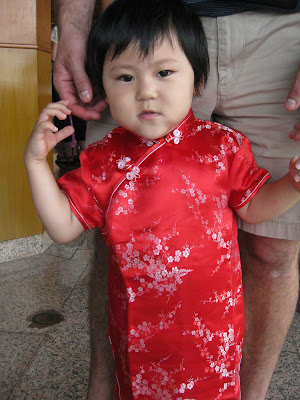 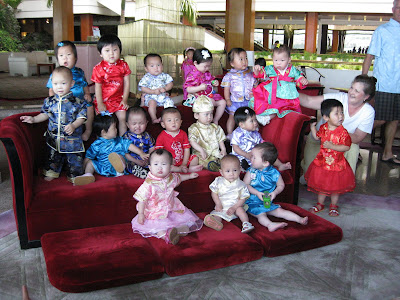 Followed by a group picture. I've shared many times how awesome our group is, now you can see for yourself that I wasn't lying.
Remember those purse strings Kory cut yesterday. I retied them when a couple friends coerced me into going shopping with them. I really had no choice, but this time I really mean it when I say I'm DONE shopping. wink wink. 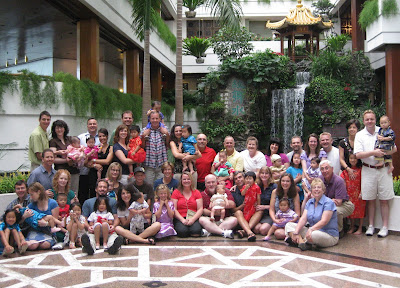 The biggest part of our BIG day was a trip to the US consulate where we, along with 36 other families took an oath stating that all of our paperwork was completed accurately to the best of our knowledge signaling the end of our immigration paperwork (on this side of the ocean at least). On Saturday when Suhn arrives in Detroit she will officially be a US citizen.
We ended the day at a French restaurant called the Orient Express. The menu was in Chinese, English and French. It was pretty good, but the company was even better.
Mya, I've got a new pen pal for you. Her name is Natalie and here is her first letter to you! 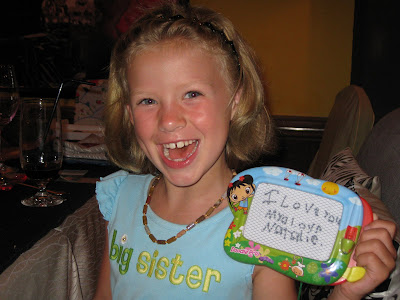 2 more sleeps until we board a plane to go home. I am SO ready, although the great people we've met actually make the going bittersweet which says a lot about them.
Regardless I'm ready to get home and get into a routine again. Ready to get away from the Guangzhoa heat and humidity and the "lovely" sewer smells of China. Ready to get back to simple breakfasts, brushing my teeth out of the faucet, and blue skies. Ready to sleep in my own bed in my own house with my family under one roof.
The End (because I'm tired and have already spent way too much time trying to figure out how to close out this post)
Posted by megs @ whadusay

Megan,
Oh this made me cry! Precious photos, precious families! What an amazing time in your life... congratulations.
Hugs to you,
Genny

I love seeing the red couch photos! It ties everyone together!

I just spent the last 20 minutes catching up on all your posts and tears are running down my face. You've been in my prayers and I'm so happy to see that you will be home soon with your precious little girl. I'm praying for safe and easy travels the rest of the way home. Blessing to you all.
Tonya

kory and megan...i've been reading all your posts and i just have to comment!

thanks so much for sharing your journey with us--i really appreciate your openness and honesty...i've been praying for all of you and i can't wait to meet little suhn.

We are so happy you are heading home... we can't wait to meet Suhn... but I gotta say that I'll miss reading your wonderful, heartwarming, sometimes heartbreaking, and funny posts about China. You have such a gift!

I've been telling Andy that I bet Megan is so missing her kids. Since you are counting "sleeps" I think I guessed right :-) Looking forward to you being home too! Continued prayers - especially over that loooong flight!

Just catching up on your blog after a week away...praying for you on your long journey home.

Praising God for His faithfulness to you and to Suhn...today and tomorrow and forever.