The Twins in China

When we decided to take the twins to China, we had two main reasons. 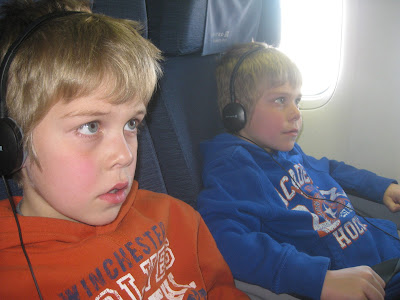 One, we wanted to expand their horizons and expose them to a new culture. Two, we hoped it would help Zak's transition to have his big brothers around.

It was a good move.

Despite the fact that we are going to have to put them through a "screen" detox when we get home. It has been so fun to have them around. I know Zak would agree.

He is already imitating them. He calls for them, loudly, using the Chinese word for big brother. He laughs at them and in general loves having them around. 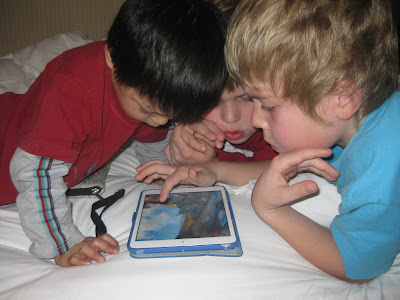 And they have been great with their newest little brother. It has been really sweet to see them looking out for him. They love to sit by him at meals and pushing him in the stroller when we go out.

Despite their wishes, they have not been able to play on the Leapster or Ipad ALL day. Among other things, I have been making them journal a little everyday. I thought I'd share a few of their thoughts/observations on our trip so far:

"I am excited for China because I will get to see Zak and because I will try new food."
"The food is great so far. I like the pancakes. I don't really like the toast."
"There are thousands of China flags in China and hardly any in the US that I have seen."
"We got Zak today. He started crying. He stopped soon."
"The plane ride was awesome. I watched a lot of movies."
"Today we got Zak. I had fun. This will be a blast. I think he felt sad and worried."
"Today we officially adopted Zak. Also we came to an orphanage where Zak and Suhn were. It was sad."
"I think Zak is happy. He is cute. He's also tough."
"The food was good. I liked the toast. I didn't like the waffles."

I also can add that they don't like the prawn flavored chips that Zak's nannies sent with him; Zak on the other hand loves them. 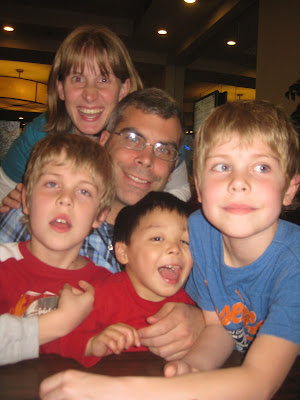 Zak continues to do really well. He grieves the hardest before nap time and bedtime. He cried pretty hard before his nap today. But when he wakes up, he is all smiles, ready to play.

We are eating dinner with our travel group again tonight and then we fly to Guangzhou tomorrow morning. We will not be sad to leave. One step closer to home and normal life, or at least our new normal. I know there will be hard days of transition ahead and we will take them one at a time.

We are missing our kiddos back home and are so ready to be together again as a family.

Again thanks for all your comments, love, support and prayers.

Hopefully the next time you hear from me, we will be breathing the fresh air of Guangzhou. :)

Email ThisBlogThis!Share to TwitterShare to FacebookShare to Pinterest
Labels: adoption journal, My Kids

Glad it's going so well having the twins with! If the biggest issues are the reality check they're going to get in terms of screen time after, and that they don't like prawn chips, that's pretty darn good! And I'm sure it has been good for Zak to have someone closer to his 'size' with to interact with, play with, and learn from!

Prayers for an uneventful trip in GZ and for things to get done quickly so you can all be home together again soon!

Good idea to have the twins journal a bit every day! Love their thoughts and observations. We continue to send prayers your way, through out the day.

So thankful Zak is continuing to do so well! Are kids are getting excited to meet Zak and love hearing about the twins in China.

Love the idea of having the twins journal about their experiences! So thankful that their presence has been a blessing for little Zak!

I am so glad that we brought our older boys along on our trip to South Korea for their little brother. It made such a difference and was so great watching them bond! Enjoy your time in GZ...that was our favorite part of our trip (in 2007).

Cute journal entries.
Hoping you are enjoying some cleaner air :).
Prayers for your whole family.