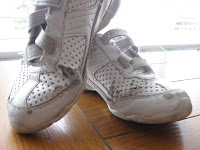 Her school shoes were quickly falling apart. New holes began to appear with more and more frequency. It was time for new shoes.

And so new shoes were purchased, but there was a problem. The new shoes had laces, not Velcro.

We had practiced tying shoes before, but it was hard and it took longer and even though her old shoes were falling apart, they were easy to put on. So the new shoes sat in a box in her closet and the old shoes continued to wear down.

Until one morning when her tired old shoe disappeared. We frantically searched the house, overturning pillows and looking under furniture. The bus lumbered past our house... still no shoe.

She needed tennis shoes for school. Time was running out. A decision was made. It was time to bring out the new shoes. The ones with the laces.

She pulled the shoes from their box and put them on with trepidation. After a quick refresher course on tying a shoe, she grabbed a hold of the laces.

Round one didn't end well. Round two wasn't much better. But she had no choice, she had to try again.

And then it clicked. Suddenly the shoe was tied. She had done it! She had tied her shoe! She was no longer a prisoner to her tired, worn-out Velcro sneakers. A new world of footwear choices had suddenly opened up to her.

Victory had come once she was forced to leave her comfort zone... and it was sweet!

She practiced a few more times, gaining confidence with each new tie. And then it was time to go to school in her new shoes.

Email ThisBlogThis!Share to TwitterShare to FacebookShare to Pinterest
Labels: life at home

oh man...I wish we had such success. Cole winds up getting frustrated and screaming. He still hasn't mastered shoe tying yet.
Congrats to Miss Mya

I love your storytelling!

I am so excited for you Mya! Learning to tie your shoes is another big accomplishment! I miss you and hope to see you soon after I get home from Aunt Kasey's. Give your brothers a hug from me!
Love you - Grandma Kaeb