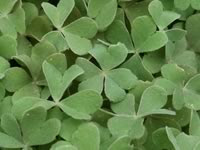 Our family has a small St. Patrick's Day tradition.

It began several years ago when some good friends invited us over for Corned Beef and Cabbage. My husband was hooked.

Every year since we have "feasted" on corned beef and cabbage when March 17th rolls around.

Thankfully it is an easy meal to make, it makes my husband happy (he has been salivating ever since he found out I bought the corned beef last week), and I like traditions. That makes it a win-win!

St. Patrick's Day is a holy day in Ireland celebrating the man who spent his life sharing the gospel with the Irish. In fact until the 1970s bar's were closed down on the holiday and then in 1995 the Irish government decided St. Patrick's Day was a great day to drive tourism and showcase Ireland to the world.

Here is the story of St. Patrick: He grew up in Britain, was taken prisoner by Irish raiders at the age of 16, spent 6 years in Ireland before he escaped home to Britain, studied to become a priest for 15 years and finally returned to Ireland to minister to and convert the Irish people. He died on March 17th, around 460 A.D.

So beyond all the commercialism and traditions is the story of a man who lived his life for Christ. A man whose story is still remembered. A man who obeyed the call God had on his life.

That is something worth celebrating!

I shared a post similar as your's about saint patrick days on my blog.

My Father in law's birthday is Feb 26, and he was closest to St Patrick's Day so his name, and hence my husbands is Patrick!! Ahhh.. I love the Catholics! (And they're Polish!!)

Cool story about St. Patrick, I have never really known the meaning...thanks for sharing.