Has Thomas the Train moved on? 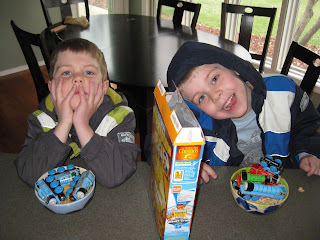 If you have followed my blog over the years, then you know my boys love playing with Thomas. They received their first train set on their second birthday and were hooked. Barely a day would go by that they didn't play with Thomas. At bedtime they would "talk trains" late into the night.

They would disappear into the basement for hours. Sometimes I would sneak down to "listen in" on their play and hear snippets of life in train world.

Wordless Wednesday would often feature the many places Thomas was found in our house. The pictures were never posed and I loved finding Thomas in surprising places.

Yep, our investment in Thomas and friends was well worth the money, probably the best toy investment we have ever made.

The other day I overheard a clerk in a fabric store inform a customer that Thomas is not as "in" as he used to be. I wanted to argue, but even I had to admit things have changed around our house since the boys started school.

I don't find Thomas the train in surprising places anymore, at least in train form. And the boys don't stay up late discussing Thomas's adventures. I don't get to overhear "train talk" like I used to.

This makes me a little sad.

Instead, my boys have found a new passion that still includes Thomas, which makes me happy. 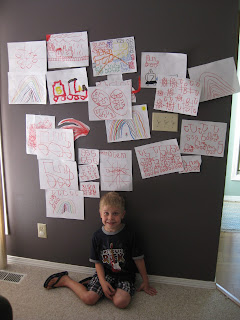 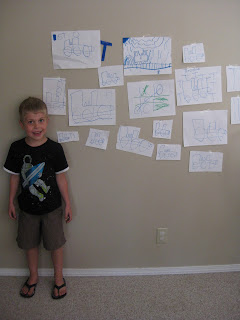 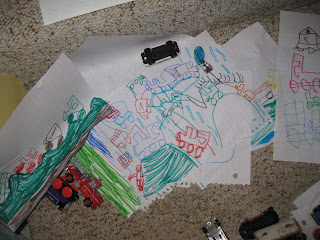 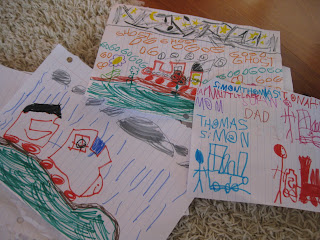 They have become quite the artists and yes, we go through a LOT of paper.
Now instead of finding Thomas the train laying around the house I am finding portraits of Thomas and James and all their train friends.

These portraits used to appear taped to the walls throughout our house until Mya had the brilliant idea of creating an art museum in the basement. 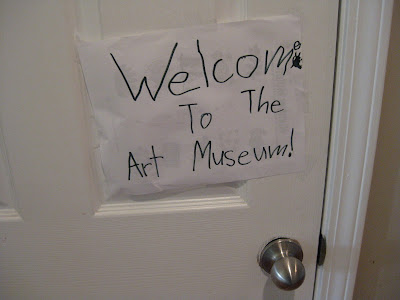 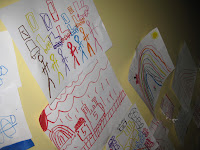 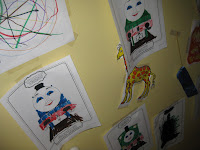 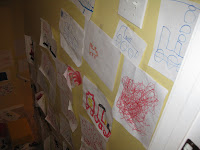 Our basement museum continues to grow. I love the creativity it represents.

Thomas may not be as "in" as he used to be, but he will always hold a special place in this momma's heart. And our little museum will commerate (for now) the days of yore when Thomas was all the rage.
Even though they grow up and move on, there is nothing quite like a boy and his train. 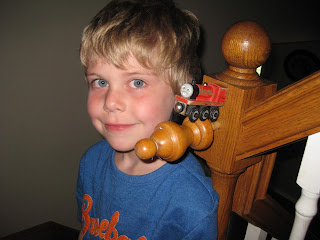 Email ThisBlogThis!Share to TwitterShare to FacebookShare to Pinterest
Labels: everyday moments, My Kids, thomas the train

My little (20m) boy just got his first starter train set last week. His little sister (7m) has already started grabbing and pulling the tracks apart...and so it begins!

My best childhood memories were building Lego cities. I'm looking forward to building awesome cities with both of them.

So this post makes me a little sad too as I've loved the random thomas shots. . .even our girls like their train set.

I was trying to imagine the day our baby dolls start getting played less but it made me too sad. : )

At least Thomas's memory is living on!

aw - well said. i love the pictures too! those boys - i just love em!!

great post, mego. sad AND sweet. gotta say, i love seeing the artists come out in my boys! :)

i have been impressed at how long they've been captive. i was curious what you were going to say they moved on to, and when you said art work, i could totally relate. it's hard to be green using all that paper. :)