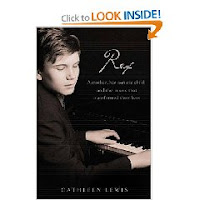 I know the plans I have for you, declares the Lord, plans to prosper you and not to harm you, plans to give you hope and a future. Jeremiah 29:11

God does have a plan. He can be trusted, but sometimes the circumstances of life make that plan hard to see. Cathleen Lewis discovered this firsthand through the life of her son, Rex.

As the cover proclaims, Rex is the story of “a mother, her autistic child, and the music that transformed their hearts.” The book recounts the discovery of Rex’s challenging disabilities, blindness and autism.

It shares the ups and downs of dealing with those disabilities: the hard, debilitating, “I can’t go on moments” as well as the shining moments of hope and progress. Many times these moments walked hand in hand causing Cathleen to learn over and over to walk by faith not by sight.

It tells the story of a mother who was willing to stand-up and advocate for her son. To fight for his right to be educated in a way that worked for him.

And it shares the astonishing, miraculous discovery of Rex’s musical ability. Rex struggled to communicate as he grew up. He struggled to read Braille and even speak. But, when it came to music and the piano, Rex was set free. Able to play back complicated musical pieces with ease, change keys and even change the feel of a song (i.e. to play it like Chopin, or a waltz, or even a Russian dance) Rex continually amazed those who happened to hear him play (including 60 minutes correspondent Lesley Stahl).

Cathleen writes in a way any mother can relate to. She tells her story in a way that will tear at your heartstrings and leave you inspired. I would recommend this book to anyone, but think that mother’s of special needs children would be especially encouraged by this story.

At its heart Rex shares the journey of a mother. A mother who learns to trust and hope in the most difficult of times and is given an example of what love and joy truly are through the unexpected gift of her son, Rex.
Posted by megs @ whadusay

I had the chance to see this mom on Hour of Power Sunday morning (while home with my sick son). What a powerful and moving message she brought with her. Rex performed and was wonderful. She touches on all the hopes and dreams we all have as mothers. She is a true warrior mother.