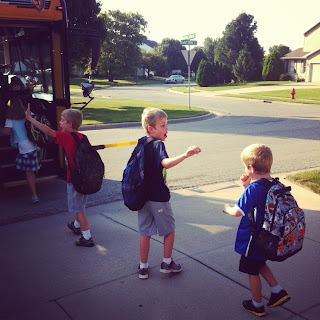 That was the sound of a huge sigh of relief as we settle into the new routine of school. It's been a bit of a crazy week.

Starting with curriculum night where I had to figure out how to be five places at once. Slight exaggeration. The actual number was three (5th and 2nd just happened to be scheduled at the same time), which followed the two Kindergarten classrooms I ran back and forth between.

Six o'clock is the new wake up time and it is kicking my butt.

The start of preschool came yesterday where I put one excited four year old on yet another school bus. Which left me alone in a very quiet house.

The night before school started I felt the melancholy rushing in. Nothing reminds me of the brevity of life like the start of a new school year. Fifth Grade, Second Grade, Kindergarten, Preschool. My days of having little ones around my feet are numbered. And after ten years with little ones, it IS a change.

Ready or not, it's the beginning of a new season. Bringing with it good and bad and new. Leaving me to give thanks for the good, learn from the bad and embrace the new.
Posted by megs @ whadusay

Email ThisBlogThis!Share to TwitterShare to FacebookShare to Pinterest
Labels: motherhood, My Life, school

I watched Suhn walking in from the playground to the front of the building today, and I was just flooding prayers over her. She was pulling that walker as fast as she could and working so hard to keep up. Bless her sweet little persistent heart!!

I think I feel the melancholy more as a grandma. I could just cry seeing these pictures!!

Our Journey to Grace and Olivia said...

right there with you...sent one off to college and one to Kindergarten! And 3 in between. Now more babies at home! Bittersweet.