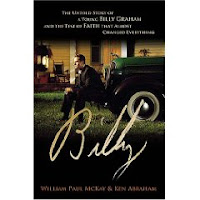 Periodically I will be doing book reviews on this blog because, well, I like books and you can receive free books from Thomas Nelson in exchange for book reviews on your blog and on-line retailers. So, without further adieu.... Here is my review of Billy!

Billy Graham is an amazing man. His life is inspiring. And, if you read the book Billy, you will discover that he was an ordinary man who chose to follow God’s call on his life. It was that choice which made all the difference.

Billy by William Paul McKay and Ken Abraham chronicles the early years of Billy Graham. It is told through the eyes of Charles Templeton a friend and fellow evangelist. It tells us about Billy before he became a household name: where he went to school, his early failures, how he met his wife and how he got his start as an evangelist. The book climaxes at a point where Billy has a crisis of faith and ends with the campaign that catapulted him into the public eye.

I’m guessing this book was written after the movie (yes there is a movie) was created. It felt like the author watched the movie and wrote the book accordingly. Regardless, it is an easy book to read, the material is interesting and it left me wanting to learn more about Billy Graham (I have added his autobiography Just As I am to my reading list).

One of my favorite moments came at the end of the book. Throughout the book Charles Templeton is being interviewed which is how the reader hears Billy’s story. (Templeton eventually became an agnostic and even wrote a book titled Farewell to God: My Reasons for Rejecting the Christian Faith.)

As his interview comes to a close the following happens:

“he suddenly grew quite emotional. ‘I believe Jesus was the greatest
teacher…the most moral person—‘ He stopped again and looked at Deborah [the
interviewer].

‘And…and if you will permit the expression…I
miss Him.’

In a sense this book is as much about Charles Templeton as it is about Billy. It tells the story of two men who started out sharing the Good News of Christ and ended up walking down drastically different roads.

If you any of this perks your interest and you decide to pick up Billy, I don’t think you will be disappointed.

My expert ranking: 3.5 out of 5 stars.
Posted by megs @ whadusay

Wow Megan - this was very interesting. I DO want to pick up the book now. That means you are a good reviewer!! :)