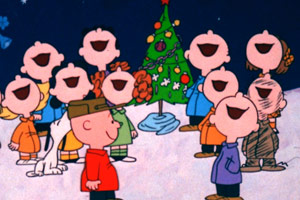 Tonight A Charlie Brown Christmas was aired once again on ABC. I grew up watching this movie at Christmastime. It always makes me nostalgic. This year Mya watched it with me. It is so fun to introduce my daughter to Christmas traditions that I enjoyed at her age.

On another note, I was pleasantly surprised to see that A Charlie Brown Christmas is still being aired. When Charlie Brown asks if anyone knows what Christmas is all about, Linus proceeds to tell him - quoting directly from scripture (Luke 2 - "And there were in the same country shepherds abiding in the field, keeping watch over their flock by night..."). Who would have thought that the same network that gives us quality programming like Desperate Housewives and Wifeswap would share with its viewers what Christmas is really about? Especially in a world where saying the words "Merry Christmas" is becoming politically incorrect, baby Jesus is being removed from public nativity scenes, and "Christmas" break is being replaced by "winter"break. Will this country someday just celebrate the "holidays" and take away Christmas altogether? I can get worked up just thinking about it...

...and then I remember that I serve a Sovereign God who is in control of this crazy, mixed-up world. He came to earth and confined himself to human form. He became a baby - a helpless, little baby - and was born in a dirty stable and laid in a manger. Because of that mind-blowing sacrifice, Christmas will always be Christmas - a celebration of Jesus birth. Praise God political correctness can never change that!

As I bring today's ramblings to an end I want to shout with Linus, Lucy and the gang,

Thank you for sharing the true meaning of Christmas.

i love charlie brown. and the christmas one is so cute and good. i just watched it all for the first time this year. (i think i caught snippets of it here and there before.) i love the perspective that being an adult brings to the 'little kid' movies, and i love sharing these christmas traditions with my kids. charlie brown's christmas is definitely one i want to have. :)
~shar

I get fired up about this too meg. We watched charlie brown shortly after thanksgiving and I too was surprized that the plug hadn't been pulled on this too. Living in Chicago, as you know, you get exposed to such diversity. I find that when I say Merry Christmas, people assert back with Happy Holidays -ugh, it bugs me. Just last night we were at the mall when their was a huge jewish thing with a large menorah in the middle of the mall going on. I was thinking, if I asked the mall management to allow us to do something with the birth of Christ if it would fly??? I highly doubt it in a secular world that hates Jesus, doesn't want to talk about it and will condemn you out of society if you talk about it. But my hope is that before Christ's return, the world will have to be in utter termoil, and that this may signify the second coming - wouldn't that be wonderful!!!

Matt and I were just talking about this movie. When we were shopping in Chicago yesterday, the theme song from this movie came on. Matt said he remembers being a little kid in school and the music teacher telling them that they should watch "Charlie Brown's Christmas". Little Matt got all stressed out because they didn't own a TV. After class he went up to the teacher and said,"We don't have a TV at my house...I don't think I'm going to be able to watch it." :) The teacher told him not to worry about it. I'm sure she just laughed once he was gone. He says now everytime he hears the song he thinks of that. It just made me laugh.