How Far Can Riches Take You?

"How Far Can Riches Take You?," the e-mail asked along with a picture of Leonardo DiCaprio as The Great Jay Gatsby. 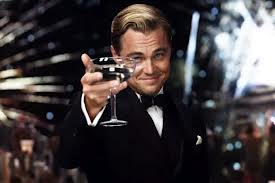 If you have read the book, I think you would agree it gives an honest answer to that question. Even a Biblical answer. The Bible tells us that the "love of money is the root of evil." In the story of Gatsby, it certainly made people miserable, although its hard to tell if they ever realized the root cause. Daisy couldn't seem to escape from its grasp.

I think that question is one of the (many) reasons I love Fitzgerald's Gatsby. Let's face it, the lure of money is a temptation for most of us living in America's abundance. Even a glimpse of lavish wealth can make us discontent. Or at the very least curious, feeding our fascination with Hollywood and the rich and famous. A fascination that is a waste of time.

Gatsby exhibits lavish wealth of the highest order. He incites the curiosity. He has almost everything he could ever want. In the end, even extravagant riches couldn't get him what he wanted and so much appears to be wasted.

I wish I was immune to the fascination with riches. Sometimes I am. Sometimes I live with an attitude of thanksgiving for what I have. Sometimes I live in the moment taking in the lavish blessings of the life God has given me. Those are the times when peace and contentment have an easier time sticking.

But other times, I find myself wanting more. Prestige, wealth; it all looks so alluring. Its a mirage that promises it will take you far, only to lead you further and further away from the things that really mean something. In the end, the pursuit of riches for where they can take you is a waste of time and even worse, a waste of life.


"She's got an indiscreet voice," I remarked. "It's full of--"
I hesitated.
"Her voice is full of money," he said suddenly.
That was it. I'd never understood before. It was full of money--that was the inexhaustible charm that rose and fell in it, the jingle of it, the cymbals' song of it...High in a white palace the king's daughter, the golden girl...

-Taken from The Great Gatsby by F. Scott Fitzgerald