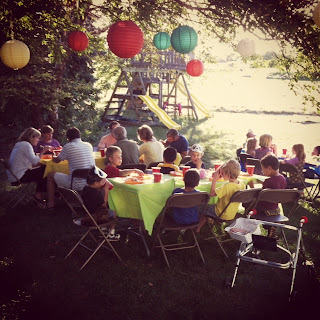 Over the weekend we celebrated Zak's birthday. His fifth birthday, but his first one with us. He has been talking about his birthday cake for months so to say he was a little excited would be an understatement.

We also celebrated the Chinese Mid-Autumn Moon Festival with cupcakes instead of moon cakes. We hung lanterns in our trees and enjoyed a beautiful September evening with family. The moon festival has an element of thanksgiving in it, I have heard it called the Chinese equivalent of our American Thanksgiving holiday.

It is one of my favorite Chinese traditions that we have attempted to make our own. I think you would agree ANY reminder to give thanks is a good thing. And while the Chinese technically thank the moon, we chose to thank the Creator of the moon instead.

He has given us a lot to be thankful for which was abundantly clear as we celebrated a little boy and the amazing gift of family.

We thank you, O God! We give thanks because you are near.
People everywhere tell of your wonderful deeds.