Once a month, a favorite blogger of mine over at Chatting at the Sky will make a list of things she has learned. Today she is doing one of those link-up thingys and I thought I'd join in.

So here you go, 5 things I've learned in June:

1. Robins will eventually give up. At least ours did. Remember that pesky couple that kept trying to take over our front porch? We battled long into May. I almost gave up, but then June came and guess what?

2. I officially have Gatsby fever. Since I heard the movie was coming out I read the book, then saw the movie (and despite what the critics said, I liked it). I may or may not have bought the over-priced-apparently-I'm-not-the-only-one-who-has-Gatsby-fever-and-the-publisher-decided-to-milk-it book and read it a second time, in two months (you know so I could underline). 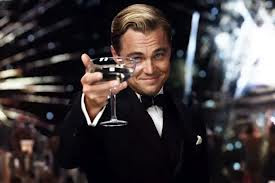 3. We joined a CSA this summer. Once a week I go out and pick up our veggies from a local farmer. The variety has pushed me out of my cooking comfort zone. Kale helped me discover I can make an omelet. And Kale chips. That my kids actually ate. Beets however, are another story.

4. Sewing can be dangerous. Mya took a class this month and accidentally cut her finger open. She won the title of "first person in our family to get stitches." Three to be precise. She was brave, and I didn't faint while she got them. Success.

To read more lessons, head on over to Chatting at the Sky.

Email ThisBlogThis!Share to TwitterShare to FacebookShare to Pinterest
Labels: My Life

LOVE the name of your blog, lady. I should have thought of that! And YES to The Great Gatsby- fabulous...and Leo, well, he just gets better with age. =)

Love Gatsby and never did learn to cook with eggplant! Thanks for lightening up my Friday. Just gave up at the pool and I only have 3 kids!

I used to teach Gatsby... I never quite pictured him as Leonardo though. :)

Love your list! I am so glad that Emily is hosting this link up. It's been so fun to visit everyone's blog.s :)

Meg! So glad you linked up. And I am also glad you mentioned Gatsby because I haven't seen the movie yet and this reminds me to put it on my list.

Kailey | living in the rain said...

What a great list! Don't give up on beets! I just tried them for the first time ever a few weeks ago. Google a recipe for Thanksgiving beets, I think? (Or maybe Christmas Beets?) So yummy! I was so scared that a hot pink veggie was too good to be true, but they can actually be pretty yummy! :)

Hmmm. Not sure I'm with you on the Gatsby bandwagon. I thought the book was a bit depressing. :) ... And I can't imagine what it would be like at the grocery store with six- already with the three ill ones, I'm getting parental advice from the checkout person, and the day my children were fantastic and their behavior was flawless was the day when someone told me that I needed them in daycare :)

Looking forward to seeing you all soon!

By the way... I have a cupcake recipe with beets in it that the boys liked...