That's Why They Call it Great

We are officially Chinese Heroes aka we climbed the great wall today and apparently that is all it takes.

A surreal experience on a beautiful day. We are wearing coats and hats in the pictures but by the time we were done climbing, the hats were off and the coats unzipped.

Kory and Simon made it to the very top. Jonah and I were not as aggressive in our climbing.

Simon and Jonah both thought the wall was "great."

And Great it is.

They named it well. 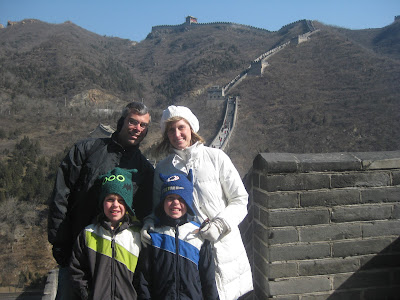 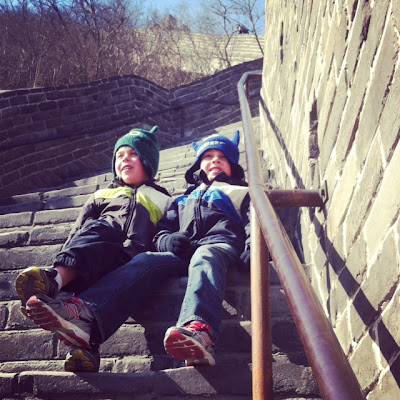 The rest of our day in Beijing was packed. We made a stop at the Olympic Village, home of the 2008 summer games. 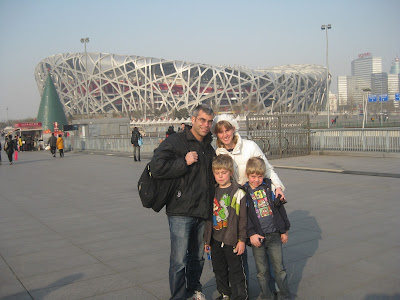 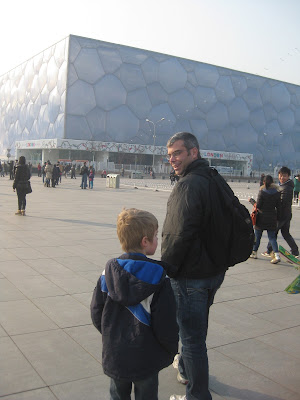 The kite vendors were out in mass. Offering us 2 kites for 10 RMB, then 3, then 4 and finally he made his final offer: 5 kites for 10. We passed, then said no again and continued to walk. It took at least 5 no's with zero eye contact before they would start to get the hint. One guy lowered his kite as I was walking towards him so I could not go around but had to go straight for him.

Sneaky kite vendor. In spite of his creativity, he still got a no.

We ended the day at a Chinese Acrobatic Show. As 10 girls climbed on one bike circling a small stage, we couldn't help but question the sanity of the idea, but they managed to pull it off. We were glad not to be sitting in the front row in case they didn't.

By the time we got back to the hotel, we were wiped and enjoyed probably our best night of sleep so far. Today was spent traveling to Zhengzhoa and prepping for the Zak-man.

That means the next post features Zak!
Posted by megs @ whadusay

Looks like a great time. Will be praying for you all and especially Zak. Keep us posted!

Will say a prayer as Zak makes his transition today. PTL, for one less orphan!

What a neat experience for your boys...and you and Cory too! Love following your travels!