Motivating Little Boys to Pick Up Toys, the Sequel

Okay, I'll admit it, I have used this little old blog of mine (occasionally) to vent. One particular post that comes to mind had to do with two little boys who refused to pick up their room.

I'm pleased to announce we've had a little success in this area, thanks in large part...


I decided to take your comments and apply them (I know, a novel idea)
The result: their room has been...

Here are my secrets: 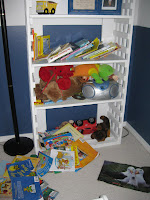 Secret #2: This is a biggie! As long as the floor is picked up, I am happy. In other words the shelves don't have to look perfectly organized. Unstable piles of books may fall and stuffed animals might end up in dresser drawers, but if they are making the attempt, I can live with that... I am learning to be flexible (my dad would be so proud!). 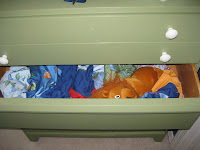 Secret #3: A summer chore chart. They get to put a sticker on their chart every morning once 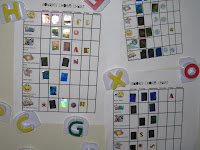 their room is picked up. This is made more effective by an older sister who is extremely motivated by the chore chart/sticker thing. Somehow it rubs off on my two not-so-motivated boys. The fact that they get a prize from our "treasure basket" (filled with dollar-store toys) plays a small part too.

Secret #4: Being consistent (this is a tough one). As my mom used to say, the only thing she was consistent at was being inconsistent. I find this true in my own life, especially with things like discipline. BUT, my boys have found that it is easier to pick up a room that was just picked up the day before. The chore chart (and the big sister who loves collecting stickers) help A LOT with the consistency factor.
So there you have it, my "secrets" are out.


Once school starts up again, and the chore chart falls by the wayside (maybe it won't happen, but it seems that is the way of chore charts...) the room may fall to shambles again. 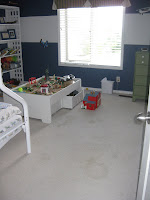 For now, I am enjoying picked up rooms and hoping some habits are established that will last longer than the chore chart!
Posted by megs @ whadusay

Email ThisBlogThis!Share to TwitterShare to FacebookShare to Pinterest
Labels: My Life, parenting

i've been contemplating a chore chart. i did one once, but honestly i think i was overly zealous and avi was really young. i'm also not sure it was simple enough, nor was there a readily available treasure chest of toys to choose from. :( (your wondering why i even tried at this point, aren't you?) anyway, could you tell me a little about how you've structure your chore chart? and even what you made it out of? thanks!

I am envious Megan! I wished this worked for us. Don't know what motivates my kid!

Great secrets, especially the flexibility and consistency ones! My son is a collector, so I've given up on having his shelves and drawers organized, but if the floor is clear, I'm happy. :)

So glad you saw that the link over at my site is working now. :)

Well done ! Great tips - We try the chore chart & it works well when I remember to do it!

GREAT JOB ALL OF YOU!
MOMMY FOR BEING SO CREATIVE & FLEXIBLE. MYA, SIMON AND JONAH FOR LEARNING TO ACCOMPLISH THIS GREAT FEAT OF PICKING UP AFTER YOURSELF!

LOVE YOU ALL - GRANDMA KAEB