The American team was in charge of crafts for three days at camp. We brainstormed ideas, provided the supplies and lead the craft. This year we made leather bracelets (with beads to add color), created postcards (decorated with ribbon) and decorated quilt blocks (which we then turned into a quilt in our spare time). The quilt turned out great and was probably one of the best crafts in the history of Camp Loubetine (at least I think so!).

The younger kids (9 and 10 year olds) ended up stringing their beads on leather strips. The older kids made these amazing pieces of leather jewelry (which I didn't goet pictures of). They really amaze me when it comes to art projects. They are so talented. And, the older boys seem to enjoy it almost as much as the girls. 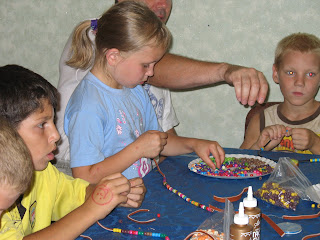 The postcards were a fun project - again the kids' creativity amazed me. The other thing that amazes me is that the kids are so quick to give away their projects to others. 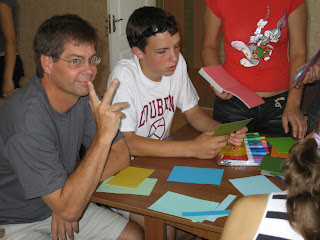 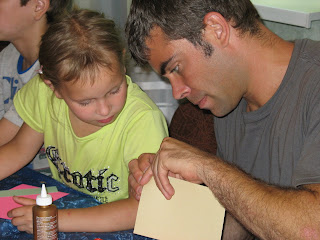 The quilt blocks were my favorite. Kory titled his "White Lightening". His first one was an attempt at an Easter Lily, but everyone thought it was a bull! Joe Gerber's was my personal favorite. He did a two block self-portrait. The glasses were the giveaway. Although by the end of the week, he needed to edit his self-portrait by adding scotch tape. I think on the second day his glasses got busted by a basketball and he had to hold them together with scotch tape the rest of the week (Brett said once he knew Joe was okay, the accident itself was quite funny!). 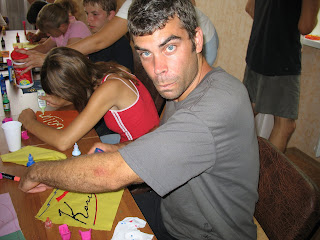 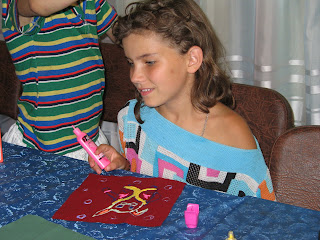 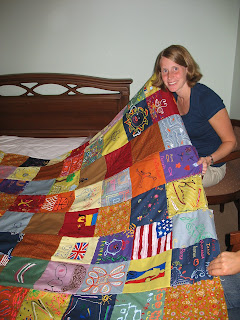 Megan,
It is fun to see the finished quilt, it looks great! I am sure it will be a special memory for the kids.

That quilt looks absolutly amazing! It would have been hard for me to not sneak it in my suitcase!! : )

Looks like you ended up doing pretty good with the crafts! The quilt looks awesome! I am running the arts & crafts program here this summer for our camp Glen View. I wished I had known you needed ideas - I have 9 weeks worth of them!