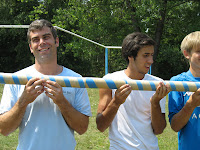 I remember being so impressed by the games the Ukraine team came up with 3 years ago and this year was the same. They are SO creative! We divided into 4 teams and every morning each team would compete at different stations to earn keys. For example one station involved seeing how many eggs we could hit with a bat; another morning we had to see how many ping pong balls we could transfer through tubes held by all the teammates! At the end of the week we went on a treasure hunt, once the treasure was found each team tried their keys and whoever had the "right" key won the treasure (more on that later!)

They also came up with a lot of games for entertainment purposes. I think part of the idea was to laugh at the Americans (Actually the idea was just to laugh which was another way to connect with the kids, some things are funny whether you are in Ukraine or USA!)

Here is Leah (USA) and Leana (UA) trying to feed each other yogurt, blindfolded! 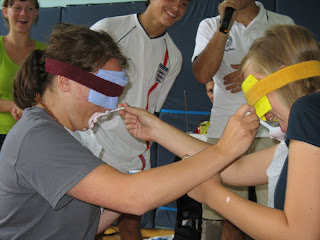 Kory (USA) and Andrei (UA)- They have nylons on their heads with soft rubber balls on the ends. They are trying to knock each other's "hat" off! 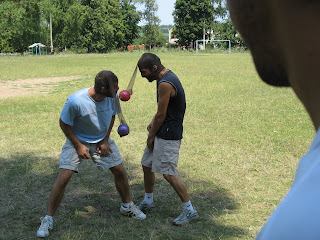 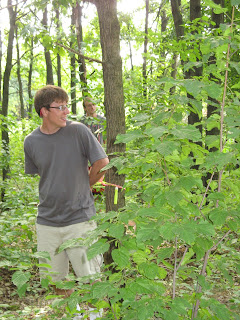 The fourth day of camp we had a big scavenger hunt. The Ukraine team was kind enough to warn us in advance, but this was also the day that each team had to find an American tied to a tree! I believe Joe (whose team came last) ended up being tied to that tree for almost 2 hours! The first hour (before any team came to find them), Misha stood guard over our Americans. They were afraid that if someone from the village found our boys tied to trees they may have tried to steal their shoes or their pants!

The last part of the scavenger hunt each team had to cross a bridge to get to the meadow where a picnic was waiting. Before our team got to the bridge, Dima pulled me aside and (through a translator) explained that as the team crossed the bridge someone was going to jump out and scare them. He asked me to stand back and watch because they didn't want to scare my baby! There was one game during the scavenger hunt they were not going to let me play because they were concerned about my being pregnant. I was able to convince them that I could play - they were very sweet! 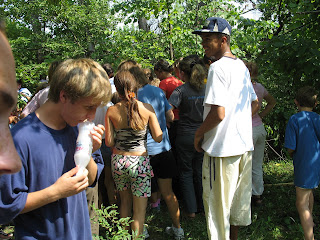 The last day of camp was the treasure hunt! We all ended up in an orchard looking for where the treasure was buried. Kory was looking for a place with fresh dirt and found a mound with two little sticks in the shape of a cross on top. He thought for sure it was the treasure. Soon a group of kids was gathered around watching him dig. When they found something, another kid reached down to grab the "treasure" and Kory started to get a bad feeling. All of a sudden I heard kids screaming and running away from Kory - his treasure had been something (we think maybe a dead cat) wrapped up in cloth. Vitalic (one of the Ukraine team) was watching the whole time laughing because he knew where the real treasure was! 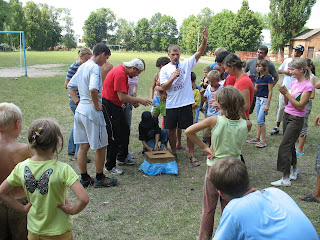 Once we had found the real treasure every team got to try their keys - my team actually won! I believe the treasure was candy (to share with everyone) and a trip to McDonalds for the winners!

The games were a blast! The Ukraine team really goes all out to provide a fun experience for the kids. It is also a nice way to bond; to be able to cheer on my team (even if I can't speak the language!)
Posted by megs @ whadusay

megan, the part about the cat had me in tears laughing!!! I can just imagine Kory, with all the energy in the world, convinced it was the right spot! I am glad that you had a great time!

Great stories!! I love to hear them!!

I'm loving hearing about your trip! How big was the town/city where you were--they have McDonald's?

Ok, GROSS!!! In my opinion cats are gross, dead ones are even grosser! (is that even a word???) Cant wait to hear more stories!

Janelle - Kharkov is the second biggest city in Ukraine (where we stayed). The town of Loubetein, where the orphanage is, was about a 30 mintue drive from our hotel in downtown Kharkvo. They had several McDonalds - we ate there - twice!!!

Looks like some interesting games! How neat! I can't wait to hear more! What happened with the other girl we were praying for?

Megan, this scavenger hunt story is so funny! It always seems like the Americans are in a continual state of confusion when you give us Ukrainian scavenger hunts like that. This had me laughing out loud... Bless Miesha's heart for guarding the guys tied up to trees!