We're back from Ukraine! Thank you for your prayers! We had a great trip and I am so glad we were able to go.

There was a much smaller group of kids this year. In years past we've had in the 70-100 range, this year the numbers averaged 20-30. Honestly, we didn't mind. I think everyone on the American team agreed that we were able to develop relationships much easier due to the smaller numbers. The reason for the smaller numbers was the time of year. A lot of the kids were away at other camps. 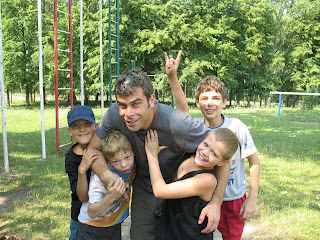 The first day of camp I was feeling frustrated by the language barrier. It made me feel ineffective. How can we make a difference if we can't even communicate? But somehow, we connected. We had a few translaters who were available. And, some of the older kids could speak enough English that we were able to have very basic conversations. Mostly, we just played games with them (a lot of volleyball with a VERY HARD ball, Uno and basketball), hugged them and were available and somehow that was enough. 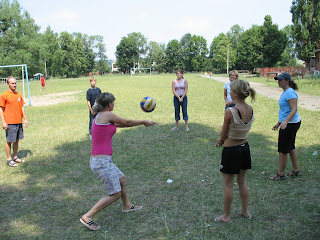 I think the American team leaves more blessed than the kids we were there to minister to. It is always hard to leave, but the fact that we can stay in touch with the kids and be involved (through letters and prayers) always helps. I've got lots of stories to share, but they will have to wait til later! 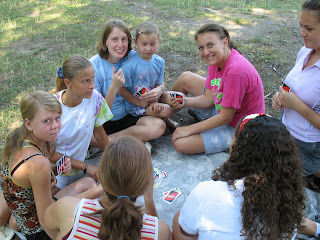 How awesome! I love seeing these pics and hearing about your trip! So are all the kids in these pic's orphans???

Great to have you home! Can't wait to hear more stories and see more pictures. How did the trip compare to your last one? HOpe it was great!

Welcome home- I am anxious to hear more from all!

Welcome back! I am interested in hearing more about your trip! Glad you had a good time!

Megan, I'm so excited to hear your stories!

i'm glad your home safe and sound, and that it was a good trip!
love,
shar

Glad to hear you had such a great time! Smaller groups are great especially when you are trying to meet needs of children and conversation is much more intimate. Glad you are home!