The Peas are Always Greener... 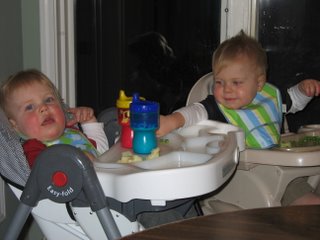 So the old saying goes, "The peas are always greener on the other person's tray." Or something like that.

As our twin boys ate their supper tonight, Jonah took this old adage to heart. Ignoring the many peas on his own tray, he decided his brother's looked much tastier and so helped himself. Luckily Simon didn't seem to mind... this time.

Already I am constantly breaking up fights between the two brothers, one always wants what the other brother has. Their sister also seems to have this problem. Not only does she want what her brothers, friends, etc. have, she does not want them to have what she has! The other day on our way to her cousin's house she informed me that she did not want Paige to have any of her water.

Having kids has definately confirmed to me that humans are not basically good as some would have us believe - that nasty old sin nature is ingrained in us from birth and shows its ugly face very quickly. As much as I would like to believe that I have outgrown the behaviors exemplified in my children, I would only be lying to myself and to you. Although I have learned not to go around physically grabbing things from my family and friends and am willing to share what I have with them, I have found more subtle ways to be selfish.

For example, I can be very selfish with my time. In a sense I can grab time away from my children as they would a toy from a friend. Pushing them off when I have something I want to accomplish (blogging for instance :)).

I can be selfish with my conversations - directing the conversation to things I am interested in and accomplishing; not taking time to really find out how my friend is doing because I have things to share.

I could go on and on, the "self-stuff" (as Beth Moore calls it) in my life is unending. Although the daily battle of dealing with my "self-stuff" can be overwhelming and quite daunting at times, I am thankful for a Savior who forgives me when I fail and gives me grace to fight back.

"If anyone would come after me, he must deny himself and take up his cross and follow me. For whoever wants to save his life will lose it, but whoever loses his life for me will find it."

Email ThisBlogThis!Share to TwitterShare to FacebookShare to Pinterest
Labels: faith, motherhood, My Kids

Aren't they just the cutest twins ever! They must have good genes.

I agree with you on the natural state of sin born in all of us seen through our children. On one hand and am continually thankful that God has revealed himself to me on this issue, but on the other I get so frustrated when non-christians can't see something in my eyes that is so simple. Simon and Jonah are so adorable!!! Life must be fun at the Kaeb house!