Love on The Office

I was/am a fan of The Office. Was because I'm really more of a Michael Scott in the office kind of fan. He made the show funny. The last few seasons have been painful and not funny. I was going to stop watching, but then they said this was the last season. And there is still Jim and Pam.

I love Jim and Pam, but even they have been lackluster as of late. They have marriage problems, Jim doesn't prank Dwight anymore, and there is no Michael.

But I kept with the show, much to Kory's dismay. I am loyal like that.

And then they went and totally surprised me. Did you see the "Paper Airplanes" episode?

Confession: The Office has brought me to tears twice (well maybe three times). The most memorable was Michael Scott's final episode. Then there was the episode where Jim and Pam finally start dating. And the third time was the end of the paper airplane episode. It aired on 4/26, but we didn't watch it until this weekend. We are a little behind.

It caught me off guard. I am not going to get into the story line because if you watched it, your with me and if you didn't you have probably stopped reading. But, to hear scripture in the form of 1 Corinthians 13 being read and then in the following episode to have Jim live that scripture out in a major sacrificial way... really cool and crazy as this sounds considering I am talking about The Office, really moving.

I love the way they portrayed the choice to love, because it is not a message you often see coming out of Hollywood. Well done writers. 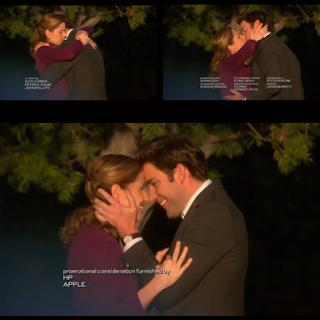 Two more episodes until the series is officially over. We'll see how tonight goes, but I've got to say I am actually looking forward to it.

Although, I still miss Michael Scott.
Posted by megs @ whadusay

Email ThisBlogThis!Share to TwitterShare to FacebookShare to Pinterest
Labels: culture

Love it! I saw that one and did about cry. They are so cute anyway and I am so thankful the writers decided to go that way. Hopefully the end will be good!