Lessons from the Floss

I never used to floss my teeth. You could call me a dentist's nightmare, or dream depending on how you looked at it. 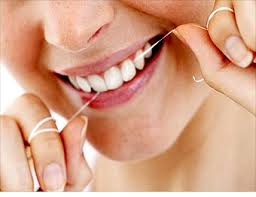 I would try. I would even buy more floss than I needed just in case the whole flossing thing caught. And maybe for a few days, before or after my dentist appointment, I would be consistent. Until the night would come when I was too tired to floss.

I would give the same "tired" excuse night after night until I didn't think about flossing anymore. At least until another dentist appointment loomed on the horizon.

Then I would try again, for a few days.

New habits are hard to start.

As a conscientious first born, I couldn't let the flossing thing go. So I kept trying. The same way at the same time.

They say insanity is trying the same thing over and over while expecting a different result. My idea of a flossing habit was looking more and more insane.

And then Lent rolled around.

This year for Lent I gave up eating after dinner. One of my strategies for keeping Lent, became brushing my teeth while the kids were getting ready for bed. Somehow, brushing my teeth at 8 pm made flossing an easier thing to add on. It took away my "tired" excuse. It also gave me added motivation to keep my Lenten promise.

Lent has come and gone, and I have managed to stay on the flossing bandwagon. I just needed to change things up. Sometimes an old strategy needs a little tweaking (or a time change) for a new habit to catch on.

I think that could be said of a lot of things, not just learning to floss.
Posted by megs @ whadusay

Email ThisBlogThis!Share to TwitterShare to FacebookShare to Pinterest
Labels: Lost in Thought

Oh it's so nice to know someone else has been in my same situation before! My dentist in Fort Mcmurray always gets on me for not flossing. I try and try but I always seem to lose the habit! I'll have to try your idea and hope it works!