He looks innocent enough. To the untrained eye he can be as sweet as pie, 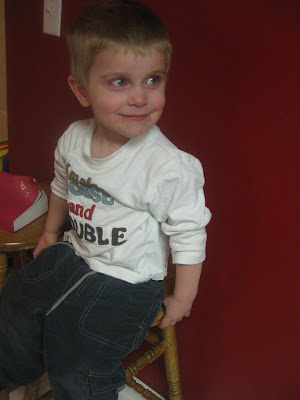 but lurking beneath those baby blue eyes is a dark side. A monster hidden just below the surface...


If you ask his name, he'll gladly tell you. He's had lots of practice.


Grandmas may try to come to his defense. They may even deny that a monster lurks beneath the surface of their darling grand baby ready to defy and terrify those who cross his path.

Don't believe them. They've been suckered by the disarming smile, baby soft skin and toddler-like, hug-delivering hands. He's got them wrapped around his peanut butter-laced fingers. Right where he wants them.

But I'm not fooled. I've seen the cold, hard evidence. The no-monster has reared his ugly head one to many times for me to deny his existence.

If you risk exposing yourself to him for any length of time, you'll see what I mean. Years of being the baby have made him an expert at his craft. Cross him the wrong way and he will spit up a NO faster than you can say burp rag. He knows thousands of different ways to say it. Each tone specially created to get his point across. He uses them often. He uses them well.

Some say knowing is half the battle. Others retort a good offence is the best defence. In my experience the best way to send the no monster into hiding is this: Sit tight and stick to your guns.


In my little no-monsters life, this line of defence looks a lot like this: 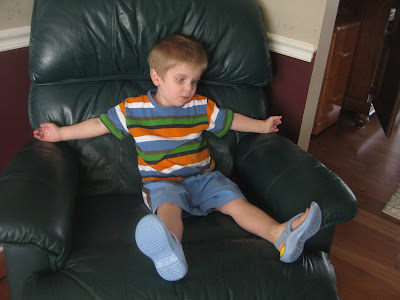 You'd think sitting in the "time-out chair" for extended periods of time would be enough to chase the no-monster away for good.


Unfortunately, the mind of a toddler will always be a mystery.

Surely you can't be talking about my little darling!

I agree with Gramma Ringger. He is a precious and I think it is even a little cute how he says "NO"

Love that little NO MONSTER!

Love the post! At our house, the 'MINE' monster slightly trumps the 'NO' monster -- heaven forbid they show up on the same day!

He is the cutest "monster" I have ever seen.