Wordless Wednesday - Would you let your son outside your house wearing pants this short? 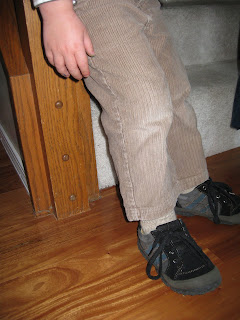 Emitt was wearing something similarly short on Sunday, but I don't think it's as big of a deal since he's not walking :)

Sadly, yes, I probably would!

yes I would, but Id be heading to the store to get a new pair:) My kids grow out of their pants so quickly I feel like my boys look like that often:(

They just grow out of them so quickly. Yes I would!

I hate to admit that I've done that many times...not necessarily on purpose though. LOL.

Absolutely! In fact, I did today. I can't keep up with his growth spurts!

Brady did last sunday...but then I ran out that afternoon and got him new pants. It's hard to keep up w/ the growing times. :)I was hoping no one would notice us @ church, we snuck in and out! Isn't that terrible?

well I do have to say crop pants on men our VERY in-style here in europe.:) but mustly wore with flip flops:).

What do you do when the pants get too short, but the next size is too long?? I finally changed Drew's pants that were way too short, to pants that are rolled and a little extra baggy!